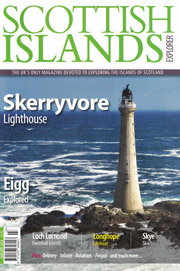 The new edition is now out - in shops and through subscribers' letter-boxes in the UK - and anticipates the coming of Spring. The cover depicts the Skerryvore Lighthouse and the photographs which complement the text are equally stunning. They would look good anywhere in the world, including New Zealand, which features in the customary Islands Beyond series, focusing on Scottish connections.

The first main article is on Eigg which looks at an island that rises from its shoreline to the dominating Sgurr. Another article did not have to take its author so far as it considers some of the fortified settlements in Loch Lomond. Lismore has its place in the Contents and the topic emphasises just have some people make wrong assumptions about such places.

The new Bradt Guide to the Orkney group is due for publication soon and its author takes another look at the various places that stimulated him while researching the book. This archipelago, together with that of Shetland, is the subject of an article on the pioneering flying services to what was once considered to be ‘most remote’. The same could be applied to Papa Westray, another topic in this issue.

Two past tragedies - the Iolaire and the Longhope Lifeboat disasters are covered while other topics provide reassurance - such as the way in which a blog is turning into a book; how some birds have the knack of just hanging on the breeze; how a lighthouse supply-vessel has been transformed into a luxury hotel; plus the sight of the sky over Skye having certain special qualities.

Scottish Islands Explorer - it's all here ...
Digital Edition: … and available at a bargain price