Home for a Gnome? 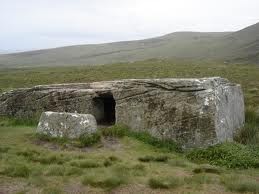 On Hoy, Orkney, there's a Neolithic burial chamber that's called Dwarfie's Stane. It was, allegedly, the home of a troll. However, other legends indicated that it was contested between a giant with a large wife and a rival man of gargantuan dimensions. It is considered to have been a rock deposited by a glacier and then worked on by Early Man. The interior has been hewn by hand and is the only example of a rock-cut tomb in Britain It's worth a traipse across the moor.

Its a little gnome fact that Merstham Nr Redhill Surrey was turning out 70,000 gnomes a year in the 1980's. Some of the original molds are still in existence and gnomes are being produced again in East Sussex to the delight of the public.

I was rather hoping that during the 30 years - one generation on - from the 1980s, the 'delight' of the public would have turned to 'dismay'.