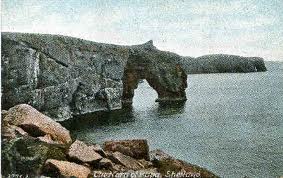 This early 20th Century photograph of the Horn of Papa shows the complete geological phenomenon that featured on Papa Stour, Shetland, until its destruction in a storm of 1953. A hundred years before the population of the island had been well over 350, but by the mid-20th Century it had fallen to just over 50. Now it has declined further to only nine residents. A complete way of life - involving customs and dialect, crofting and fishing - has ended. A local folk song began 'Oot bewast da Horn o Papa' referred to fishermen going to the west beyond the Horn and its chorus was 'Rowin Foula doon!' - an allusion to rowing to a point where the high cliffs of the island of Foula (below) were no longer visible over the horizon. That meant getting to fishing grounds some 60 miles off-shore. 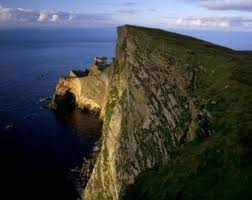