No Place for a Preacher 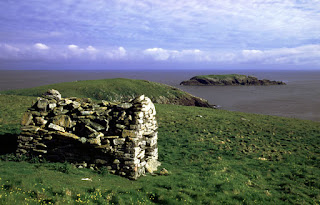 The Flannan Isles or Seven Hunters are a small island group some 20 miles west of Lewis and have featured here during the past two days. This is the largest island, Eilean Mor, with the ruin of the smallest of  chapels. It was affectionately referred to as the 'dog kennel' by the lighthouse keepers. It, as the group, was named after St Flannan, the son of King Thomond, who became a monastic abbot, the Bishop of Killaloe and an Irish saint. He actually travelled to Rome to be consecrated by Pope John IV. This was a remarkable journey to make in the 7th Century and there is a paradox that such a diminutive building on an island with so few permanent settlers over many centuries should refer to a man revered as a great preacher. The photograph comes from the Sea Harris Gallery.