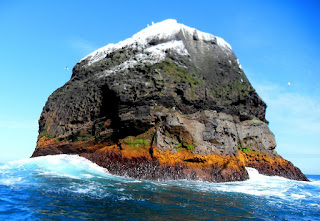 The most isolated part of the British Isles draws people, despite being seen by so few and landed on by even fewer. Yesterday's blog Climbing Rockall led to further researches and here are film clips of the Annexation of the islet in 1955 and of Tom McClean's landing in preparation for living (or existing) there in 1985. Sit back, relax and relish the endeavours of others, without having to lift a finger.

Amazing video, I had not heard of this person's attempt to live on the rock. Looks EXTREMELY dangerous!