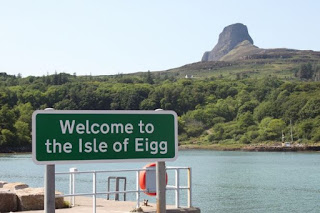 There have been times when 'welcome' was not a word associated with visitors to Eigg. The 16th Century Massacre on the island is described on the BBC website as is a sequel to it - the acquiring by Sir Walter Scott (1771 - 1832) of a skull that he took from the scene of the event to his home in Abbotsford, Melrose. Research on the bones could lead to some relevant information about the atrocity of some 600 years ago.