A Gnat on the Flannans 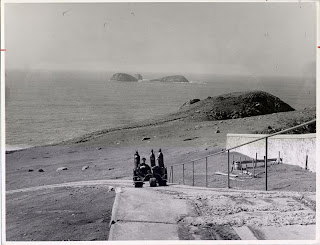 This image, courtesy of the Northern Lighthouse Board, shows a Gnat in action on Flannan Isle. Richard Evans explains: 'This three-wheeled vehicle was used by the 'keepers in the 1960s to ferry gas bottles and stores from the landing-stage up the steep incline to the lighthouse. It replaced the trolley running on tramlines along the same track, with ascent and descent controlled by a pulley-guided wire powered by a winch at the top. The tramlines were ripped up and the track smoothed to let the Gnat's small pneumatic tyres run on it. Production of the Gnat - a four-stroke, 400cc, cross-country vehicle by Aimers McLean of Galshiels - began in the late '60s and continued for ten years.'

I actually have a gnat and original trailer awaiting restoration - could it be the last survivor?
Great to see a pic of one in use
Cheers

As you are aware the GNAT was made in Galashiels and I am urgently looking for one to restore to be placed on display in Galashiels. please call 07554802254

urgently looking for a GNAT to restore and place on show in Galashiels. please call 07554802254 John