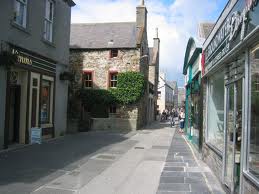 This image of Kirkwall Main Street has been used here previously, but its caption is rather compelling - 'Before the crowds.' Yesterday saw the cruise ship, Caribbean Princess, in the harbour and this vessel has a passenger list of 3599. Not all of them would have come ashore, although some members of crew may have added to the throng. Read what The Orcadian had to say.