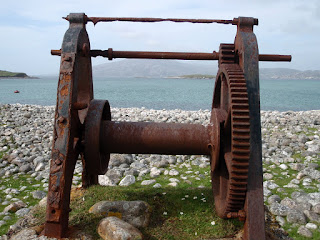 The population of Scarp, to the west of Harris, peaked at 213 in 1881, but even in the 1940s there were 100 Scarpachs living on this off-shore island. Everyone resided in the fertile south-east corner and the men would gather each morning in a 'parliament' to parley or speak about their work for the day. Similar conferring took place on St Kilda and Handa. Sometimes hours were spent on discussion and little was done. The women did not have these distractions, but continued to be industrious. The population dwindled and by 1971 the Census reported two inhabitants. By the end of that year there was none. The attractions of Hushinish (below) across the water were compelling, although the road beyond has its length and limitations as shown on a YouTube clip. 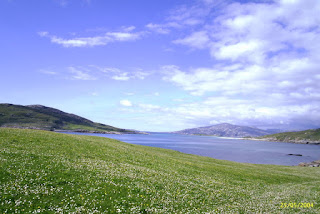