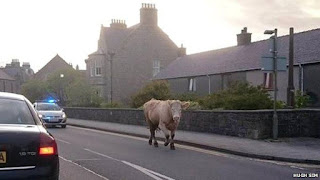 The bullock which, on Tuesday evening, escaped from a Shetland field to the streets of Lerwick caused injuries to two people before being calmed by the presence of a cow. It also introduced the word 'stot' to a wider public. In Scots it refers to a young castrated ox, steer or bullock and dates back to the 18th Century. The Oxford English dictionary traces the now-archaic word to the 17th Century when it meant to bounce something against a surface or to lurch or stagger. The BBC has some film footage of the stot stotting!