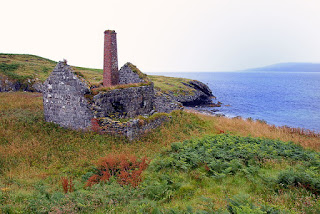 The church on Nave Island, to the north of Islay, dates back to the 13th Century. However, the fragment of an arm of a cross could well have come from the 5th Century for this was probably an island with a long monastic tradition. By 1785 the building was in a ruined state and became converted to industrial use by a group of kelp-burners who constructed a furnace and chimney within its north-east corner.