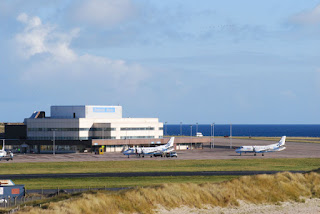 Sumburgh Airport, at the south end of the Shetland archipelago,was opened in June 1936 by the pioneer of aviation in the Highlands & Islands, Captain E E Fresson. Its use was boosted by the RAF in the Second World War and again by the development of the local oil industry from the 1970s. Increases in recent passenger numbers have led to investment in a refurbished terminal that has just been formally opened. Shetland News gives the details of these improvements, over 80 years after the airport's first passengers were carried.