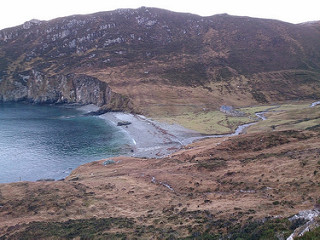 Here is a remote, abandoned settlement in The Pairc, Isle of Lewis. It's the Gamekeeper's Cottage at Mulhaggery on the coast overlooking the Minch. Some 18 photographs of a camping trip in January 2014 from a flickr selection by Murdo Campbell are well worth seeing. So is the reference to a former resident, Murdo Morrison (1872 - 1959) whose journeyings took him as far as Punto Arenas in southern Chile. Some people get around.