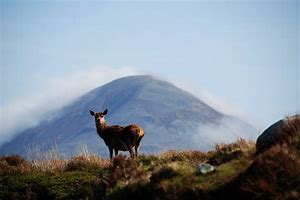 Here's a creature which knows the landscape that many will immediately identify as Jura. However, most people would not be aware that some of the geological formations on Mars are named after this island as well as Rona, Scalpay and other Scottish places. By chance, photographs taken by NASA's Rover, Curiosity, have yielded some interesting connections with crystal formations found on Jura, Earth. Read about it on the BBC website and look at panoramic views of the landscape of the Red Planet through the Mail Online.