Island-enthusiasts are a relatively small group and accustomed to being in a minority. However, scientific research tends to be conducted among another minority - of about 10% of the world's population - those who are western, educated, industrialised, rich and democratic - also known as WEIRD. The full article on this topic is available through the New Scientist. 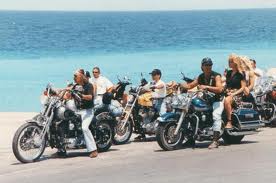 I wonder whether there are enthusiasts for local islands among, say, South-east Asians, or do they go without saying? The enthusiasts above are for Harley Davidsons and are photographed at Rhodes ... rather than on roads!