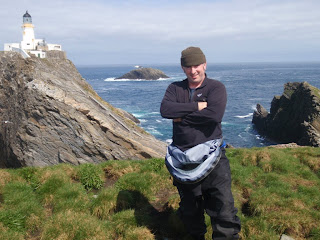 The preparations for the Andy Strangeway Expedition to Rockall are in the final stages. Recently the team was on Cliff Skerry at the top end of the UK in order to replicate the climb up the country's most westerly outpost. The leader is pictured here on Cliff Skerry, with the well-known lighthouse on the next islet, Muckle Flugga, and Out Stack, sometimes referred to as 'the full stop at the end of Britain' beyond that. Andy's personal preparations have included a training venture in his native Yorkshire.