The Road to a Play 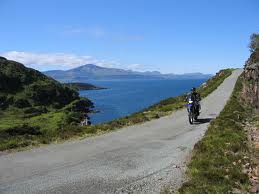 When Calum MacLeod used a route on his home island of Raasay, he saw its potential as a road. The authorities did not share his view. So in the winters between 1949-52, he constructed the one-and-three-quarters-mile road  with the help of his brother, Charles. Subsequently it became adopted and surfaced by the Council.  Calum's Road is now the title and topic of a play performed by the National Theatre of Scotland.