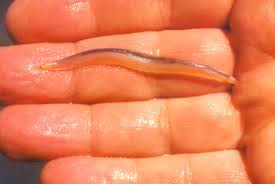 The BBC has recently presented two stories concerning fish. One involves a Shetland company manipulating its scales in order to create what has apparently turned out to be a £47.5 million pound scam involving catches. However, this company and several fishermen were caught out ... by the authorities. Then a marine survey has produced some remarkable findings from 220 square miles off the the Scottish coast. Around the Small Isles, over 100 marine specimens were identified and off Tankerness, Orkney, the rare prehistoric amphioxus was found. This fish, pictured above, lacks both a brain and a face. Could the two BBC stories be connected?