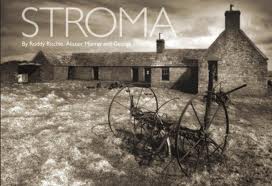 'Simplicity, sobriety and industry' apparently applied to island-life on Stroma, the only island administered from Caithness. Other distinctive differences are described in an analysis that includes references to the two major rooms in the single-storey houses that were occupied until 1962. These were the 'but' and the 'ben'. The Islands Book Trust has organised a trip to Stroma on Saturday 14 July and has published a finely-illustrated book, the cover of which is above.