An Ancient of Days 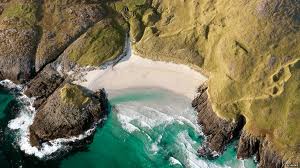 Archaeologists have been busy in the Western Isles and unearthed some exciting settlements south of Lochboisdale on South Uist, at Loch Euphort in the isolated centre of North Uist and at Loch an Duna between Barvas and Carloway in the north of Lewis. Among their methods of research was to ask local people  about the whereabouts of possible findings. It does make such a resident sound like an 'ancient of days'. The image above is of an abandoned settlement on Harris and makes one wonder why anyone left a place that looks particularly idyllic.