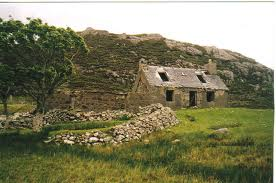 Yesterday was when I was cut off by a technological failure caused by human weakness. Today I hope to be in an area - The Pairc, South Lochs, Lewis - which has always been cut off. Former settlements, and there were many of them, were always on the coast because the hinterland has never been developed. The Islands Book Trust has arranged an exploration up Loch Claidh, around to Baigh Reimsabhaigh and Bagh Ciarach before heading up Loch Seaforth to Ceannmore (above). These were places characterised by human endeavour and resilience.

Scottish Islands Explorer - travelling to ultimate destinations in the UK