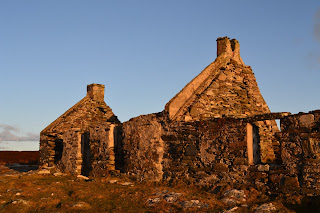 Richard Clubley writes: 'I am just back from Colonsay. Here I was up before dawn one morning to catch the sunrise as the first rays struck the houses at Riasg Buidhe, referred to by Richard Ralls and Marc Calhoun in their comments on yesterday's item on abandoned croft-houses. The house, standing along with two rooms and two gables still upright, can be seen surrounded by early morning frost. 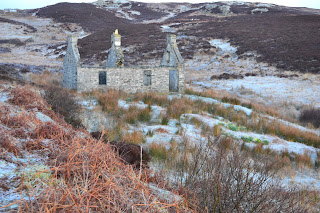 An 82-year-old friend of mine on the island says it had belonged to her mother-in-law. The houses were abandoned in the 1920s when the folk were moved into modern houses, closer to the road.' 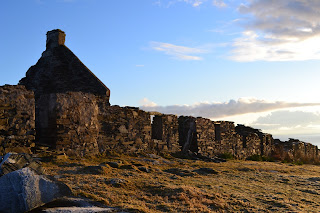 When I was teaching on Colonsay we had a visit from a very old lady who was born at Riasgh Buidhe. Unfortunately her memories were very vague but she remembered the move to one of the new houses at Glassard. These are just up the road from the village of Scalasaig.