A Far from Golden Promise 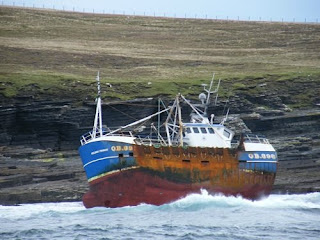 This photograph by Gordon Campbell is of the Golden Promise, an Oban-registered scalloper, that ran aground off the west coast of Stroma in the Pentland Firth early yesterday. All five members of the crew were rescued by a helicopter from RAF Lossiemouth and none was hurt. The Longhope and Thurso lifeboats had been requested to launch. It's a timely reminder of the dangers that beset 'those who go down to the sea in ships'.

Thanks for your blog. A daily treat. We are subscribers to your mag and annual spring visitors to the islands.
David & Margaret Gartside, Formentera, Spain.