Filipinos and the Fleet 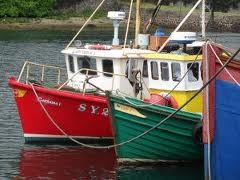 The skills of Filipino fishermen will continue to serve the fleets of the Western Isles now that their visas have been extended for a further year. However, there will be no extension beyond 2012. Many skippers are finding it difficult to recruit suitable UK crew-members and supplies to the fish-processing factories have been threatened, with local jobs at risk. The variety of species caught between the North Atlantic Ocean and the South China Sea must be extensive, with a range measured by the wide gap between fishermen's hands.