Here is Gigalum, viewed by these sheep from Gigha. It is one of those many islands that fulfils a dream for some people. It is described on the web as having a 'modern house on it', and Richard Evans has sent in a photograph and description of the property on its 30-acres: 'Star-shaped, turf-roofed home with three double-bedrooms, three bathrooms, octagonal living-room, built in the 1970s. It is a quarter-of-a-mile from Gigha and has its own spring water supply.' Any would-be takers, were it on offer? 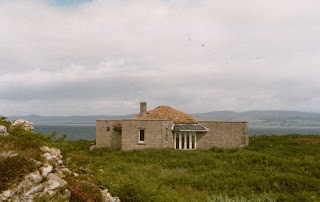